Survey on the preferences for smart homes 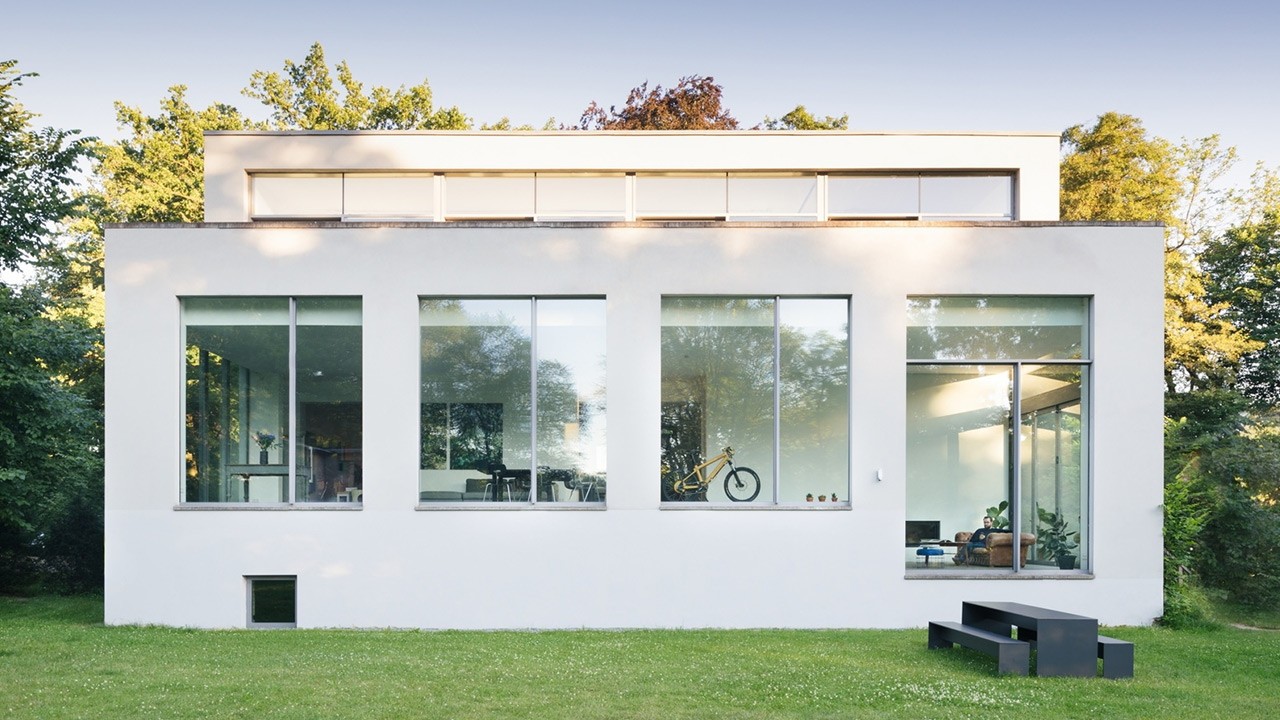 Stuttgart / Las Vegas – Bosch offers smart home solutions for many different areas of the home. The Bosch Smart Home System works interoperable: the devices are connected via the Smart Home Controller and can talk to each other. The Bosch Smart Home App allows you to control and monitor the lighting, heating, smoke and motion detectors by tablet or smartphone. At CES 2017, Bosch will be presenting extended functions of the Bosch Smart Home System with the addition of a smoke alarm and motion detector, as well as the Scenario Manager. When it senses smoke, the smoke detector activates a siren in the device and sends the homeowner a message over the app. A clever additional function also allows the siren to be used to scare off unwelcome guests. The Scenario Manager makes running your connected home even more intuitive and it supports everyday tasks: for example, by checking that the heating, electrical appliances, and lights are switched off when you go out. 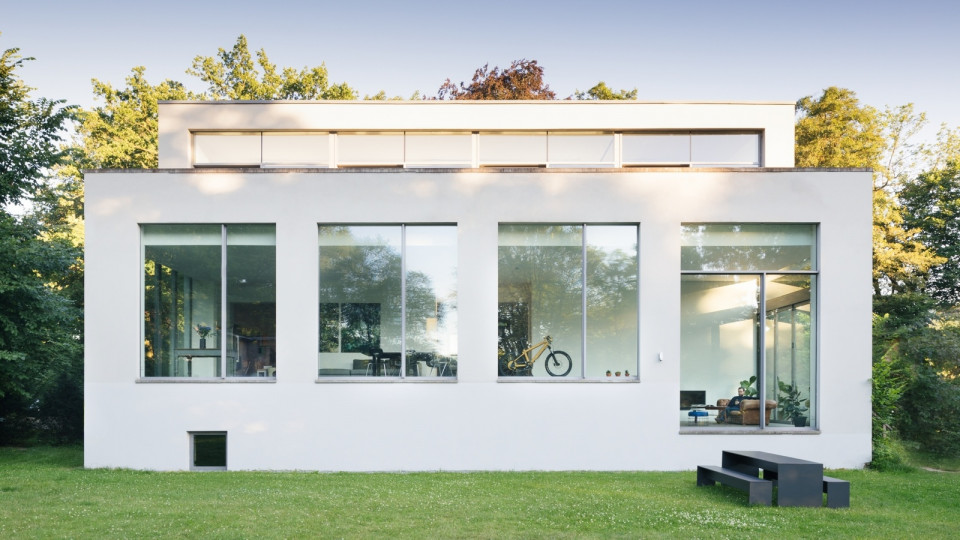 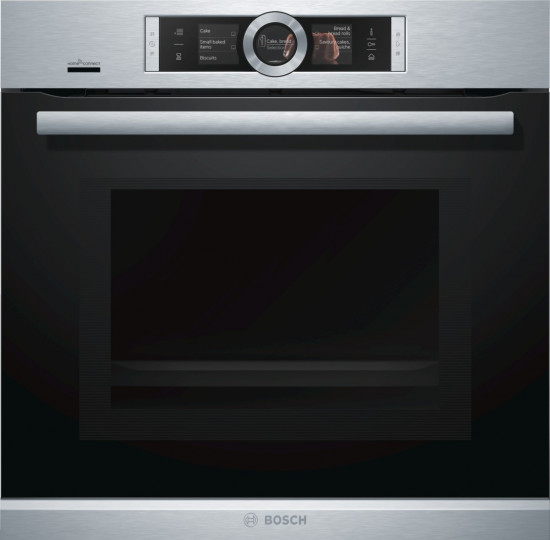 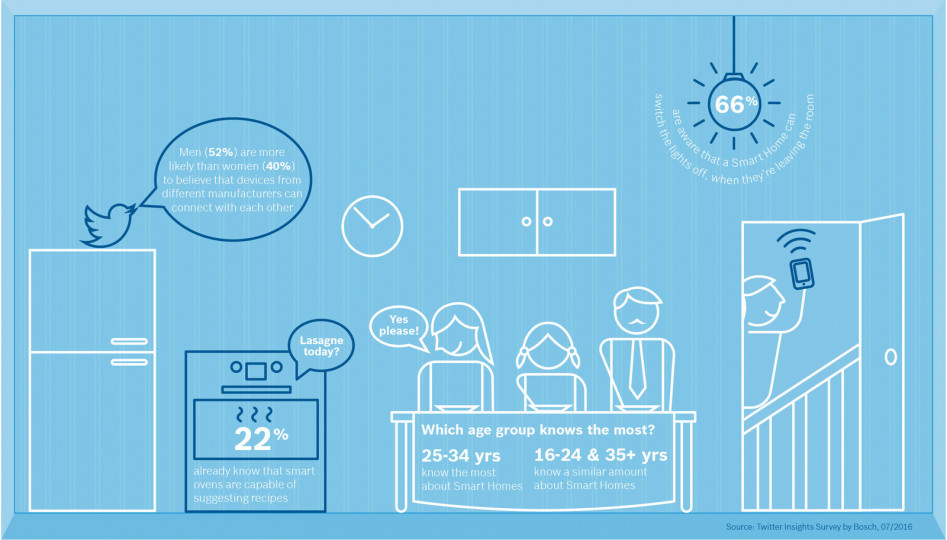 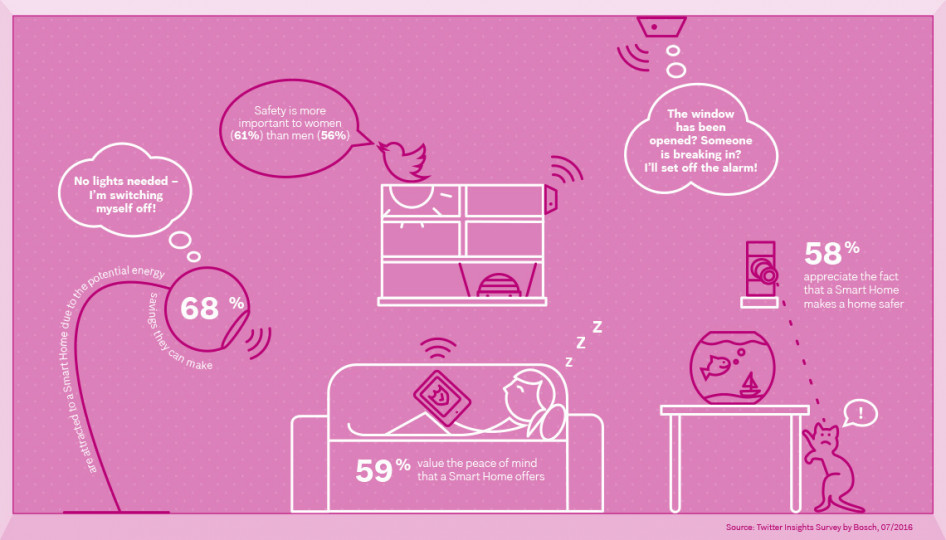 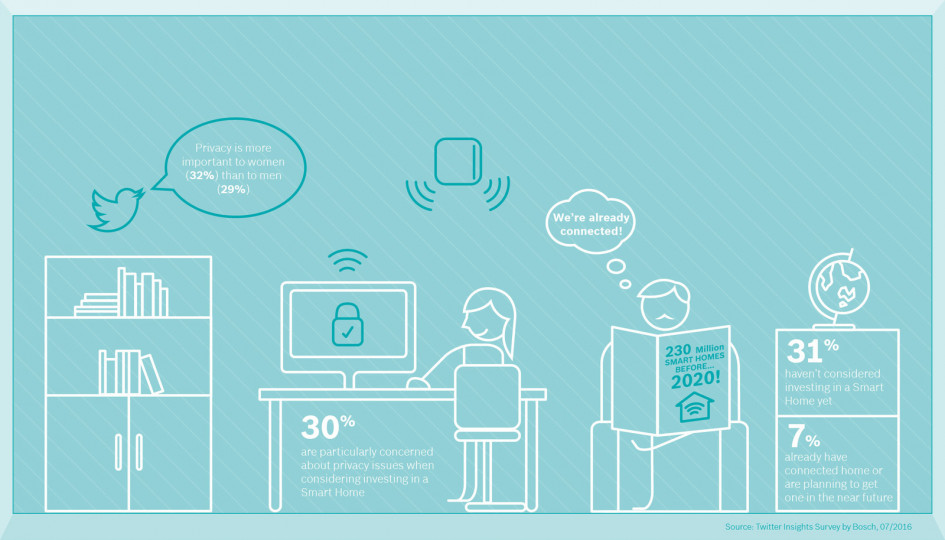 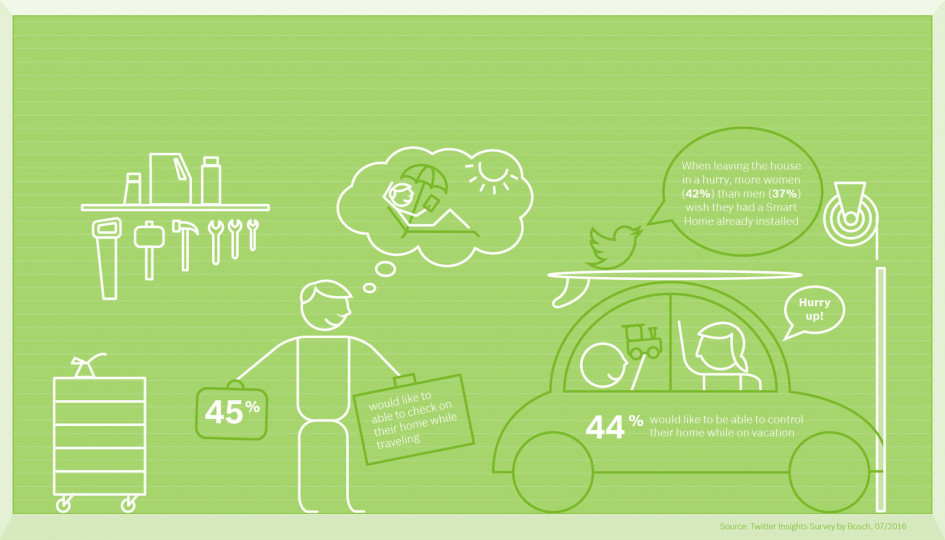 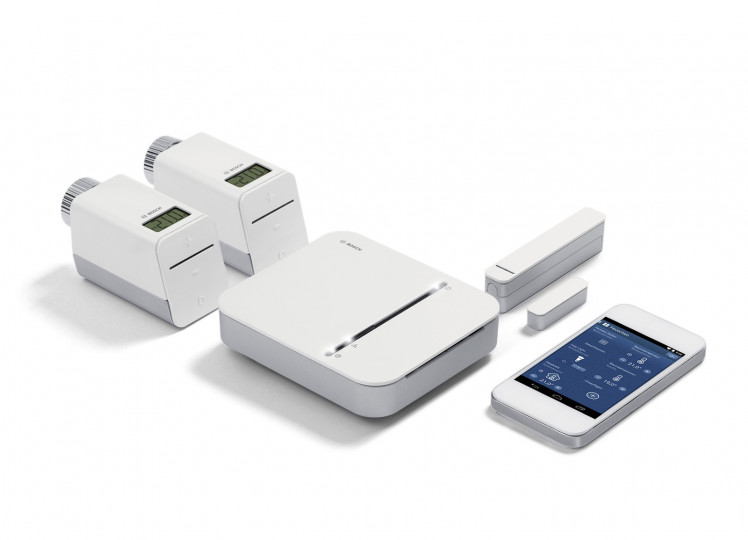 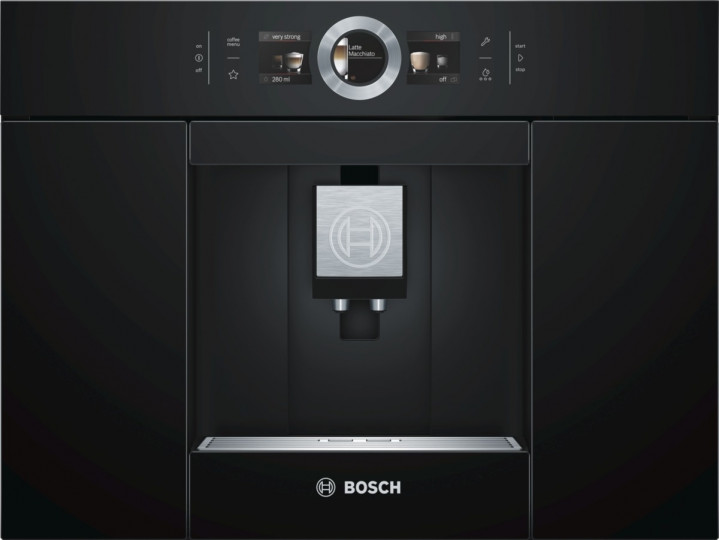 The British and the Americans want to control their home “on the road”
Recently, Bosch has conducted a survey on the topic of smart homes together with Twitter in Germany, France, Great Britain, Austria, Spain and the US. The results show that an intelligently connected home can do more today than the majority of respondents considered possible.

The connected home has a place in everyday life for the British and the Americans. At least this is the case if you ask them in what situations they would want to be able to control their smart home while they are on the road. 60 percent of the British and Americans feel this desire, when they are traveling by train or car, for example. Among the Spaniards, Germans and Austrians, this figure is only about half as high, but with the French, it is at least 45 percent. The country comparison is quite similar when respondents are in a hurry. Incidentally, being in a hurry is a situation in which mostly women believe they can reap the benefits of a smart home. They have this in common with the youngest respondents (16 to 24 years), who also want a smart home, particularly while they are lying on the sofa. The idea of being able to have access to your home while you are on vacation has a certain fascination across countries, ages and genders that increases with age, whether it’s to look after things or to turn up the heat before returning home.

Saving energy worldwide an important selling point
The smart home takes care of annoying routine tasks automatically, enables control even far away from home and thus conveys a reassuring feeling. Nevertheless, the respondents were even more convinced by the potential for saving energy, when the heating switches off automatically as soon as the windows are opened, for example. The Spanish, French and English, in particular, seem to be very interested in saving money. Between 71 and 75 percent considered saving energy a convincing argument in the survey. While this was also the most popular answer the Germans surveyed gave, they come in last place here by country comparison with 59 percent of the mentions. This is quite surprising because the Germans are normally known for their environmental consciousness. Presumably more financial than ecological aspects make energy saving possibilities so interesting in countries like Spain, France and England, however.

Going on vacation without worrying
Reassurance and security come in second and third place in total as arguments and were named by 59 and 58 percent of the respondents. A smart home that automatically sounds an alarm when an intruder breaks in and warns the residents by sending a push message to their smartphones is just as impressive as the idea of being able to look after things at any time via a connected camera. Security plays a particularly important role for women. While they are generally less convinced of all of the other arguments than men, the situation here is exactly the opposite. Only a third of those surveyed find it especially convenient to be able to brew the cappuccino already while they are still lying in bed. This is where the French set the tone: 42 percent greatly appreciate being able to find their café au lait ready when they walk into the kitchen.

The French have the greatest confidence in the connected home
A smart home helps make our everyday lives more convenient, saves energy and money and protects the home better. And yet many Twitter users are not yet aware of what a connected home is already capable of doing. For instance, while two thirds of the respondents know that the smart home can turn the lights off automatically when they leave the house, only 22 percent can imagine that the oven can already suggest the perfect recipes. By country comparison, it is worth noting that Twitter users from France are most confident of what smart home technology can do compared to the British, the Americans and the Austrians, for example. Germans and Spaniards, on the other hand, consider much of what is already possible today to be a vision for the future.

It is particularly striking that especially the 25 to 34-year olds come closest to the reality with their assessments. The fact that awareness of the possibilities decreases with age is not as surprising as the fact that many digital natives do not know what functions are possible today. Especially for the 16 to 24 year-olds who don’t even know a world without the Internet, networking at home is still surprisingly unknown. The reason for this could be the lack of relevance that home topics have for this age group. This reasoning does not apply for women, however, who were generally more cautious about what a smart home can do in their assessments than men were.
Furthermore, only 50 percent of the surveyed are aware that today’s smart home systems are interoperable, meaning that different devices can communicate with each other, even independent of the manufacturers.

Many suspect high costs, data protection a high priority
When asked about the reasons why they have not yet linked their home, more than half of the respondents cited high initial costs, whereby this factor becomes less important with age. Especially the Spaniards (70 percent) and the French (68 percent) say that the technology is too expensive for them. Data protection, a topic that Bosch is working closely on, is a major concern for a third of the respondents. In fact, all smart home solutions from Bosch meet the highest security standards. Every user can decide for himself whether his data should remain inside the house or be loaded into the cloud for certain services.

31 percent of those surveyed have never even thought about a connected home before. This is quite surprising, especially in view of the many different areas in which a smart home can be quite useful for its inhabitants. But at least around one in ten people in Germany and Austria have already allowed themselves to be convinced, and thus already live in a connected home or at least plan to do so, more than in all other countries that participated in the survey.

The Internet is the number one source of information
Two out of three of the Twitter users surveyed indicated that they would visit the manufacturers’ and dealers’ websites before purchasing smart home applications. 42 percent rely on blogs and forums. The Internet is thus clearly the most important source of information. Shops and brick-and-mortar retailers only come in third place at 35 percent. The stationary trade plays a subordinate role in the UK and the US, in particular. Only half as many respondents seek information here as in the other countries. It is also worth mentioning that the very youngest among those surveyed check more offline and would go to a store.

About the study
This survey of Twitter users was conducted between July 26 and August 3, 2016. 6 265 respondents from Austria, Germany, Spain, France, the UK and the US participated in it; more than 1 000 Twitter users per country and close to 500 from Austria.
Overview Survey Results

EXPERIENCE BOSCH AT THE CES 2017 in Las Vegas, Nevada, USA: At the CES 2017, Bosch is showing how the Internet of Things is getting personal – how things can be turned into partners. Connected technologies enable personal assistance in all areas of life: they improve mobility, shape the cities of the future, make the home intelligent, health care technology more efficient, and they make work easier. For the fifth time at CES, Bosch is presenting an expanded portfolio of "simply.connected" networked solutions.

The Bosch Group is a leading global supplier of technology and services. It employs roughly 375,000 associates worldwide (as of December 31, 2015). The company generated sales of 70.6 billion euros in 2015. Its operations are divided into four business sectors: Mobility Solutions, Industrial Technology, Consumer Goods, and Energy and Building Technology. The Bosch Group comprises Robert Bosch GmbH and its roughly 440 subsidiaries and regional companies in some 60 countries. Including sales and service partners, Bosch’s global manufacturing and sales network covers some 150 countries. The basis for the company’s future growth is its innovative strength. Bosch employs 55,800 associates in research and development at 118 locations across the globe. The Bosch Group’s strategic objective is to deliver innovations for a connected life. Bosch improves quality of life worldwide with products and services that are innovative and spark enthusiasm. In short, Bosch creates technology that is “Invented for life.”