Another forty computers for Hatvan

Hatvan – At a ceremony Robert Bosch Elektronika Kft. handed over to the Hatvan City Council forty computers that will soon be helping teachers in local schools and nurseries. The IT support, which has a value of one and a half million forints, is being shared by the Council Office, the Gesztenyéskert Nursery and the Szent István Primary School. Bosch already sponsors a group in the nursery and a class in the primary school. The Bosch plant in Hatvan has been an active participant in raising standards in local education and in modernising the surroundings of nursery and primary-school children for several years. 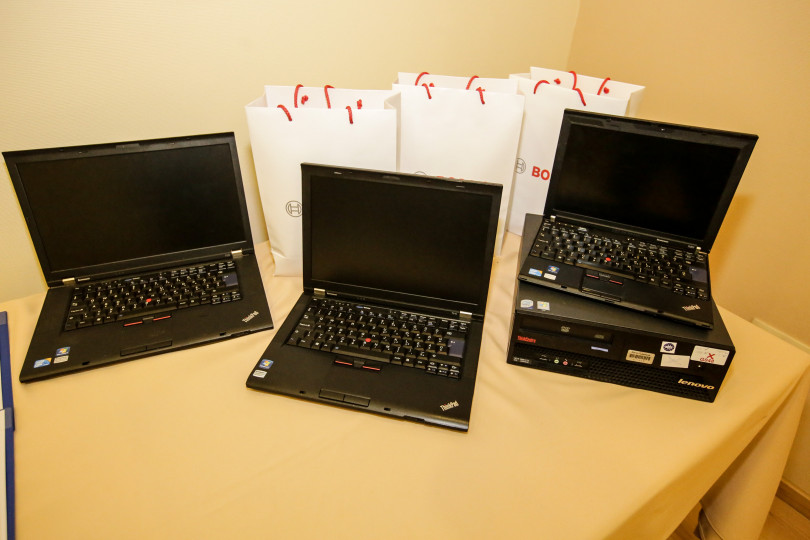 “We hope that these advanced computers and laptops will promote the spread of digital knowledge, help teachers to present teaching material and pass on knowledge, and help children to learn and develop,” said Volker Schilling, Commercial Plant Manager.

Possession and control of knowledge is now spread more widely, and the teacher’s function is more one of mentor and helper. That is why teachers need IT support of the kind being provided by Bosch. Children, too, will benefit from access to the right kind of digital content and opportunities to develop their IT capabilities.

This is the latest in a series of actions by the Bosch plant in support of municipal operations. By providing computers to the Council Office, it will contribute to the flexibility of the work of office staff. “Bosch is well known for its philosophy of social responsibility, and this action puts particular effort into supporting the council in fullfilling their tasks to the benefit of the people of Hatvan,” said Schilling.

The Bosch Group is a leading global supplier of technology and services. According to preliminary figures, its roughly 290,000 associates generated sales of 48.9 billion euros in 2014. Its operations are divided into four business sectors: Mobility Solutions, Industrial Technology, Consumer Goods, and Energy and Building Technology. The Bosch Group comprises Robert Bosch GmbH and its more than 360 subsidiaries and regional companies in some 50 countries. If its sales and service partners are included, then Bosch is represented in roughly 150 countries. This worldwide development, manufacturing, and sales network is the foundation for further growth. In 2014, Bosch applied for some 4,600 patents worldwide. The Bosch Group’s strategic goal is to deliver innovations for connected life. Bosch improves quality of life worldwide with products and services that are innovative and spark enthusiasm. In short, Bosch creates technology that is “Invented for life.”