Industry 4.0 in practice at Bosch - Multiple ways to enhance competitiveness

Stuttgart – Bosch is boosting the competitiveness of its factories by applying its own Industry 4.0 solutions. At present, the Bosch Group has over 100 projects on this topic, with this number rising rapidly. A few reports from Bosch associates demonstrate what benefits these solutions offer. 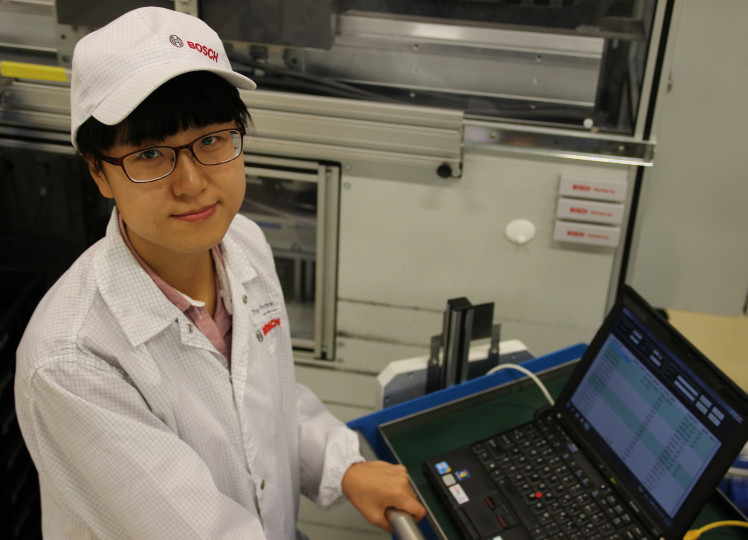 Turning inventory into a walk in the park
Zhao Chunya, product planner in Suzhou, China: “Before, we had to devote a lot of time and effort each year to doing inventory. Plant 1 alone has four manufacturing areas, each with up to 2,500 machines, test benches, and measuring equipment. The process sometimes took up to a month for ABS manufacturing alone, with some of the equipment standing idle during that time. We used to print out lists and head off in search of the equipment. Sometimes we had to crawl between the machines to find the stickers with the information.

All that has changed completely. Now I’m able to do it alone in just four hours. We fitted all of the machines and equipment with RFID transponders. This allows objects to be identified without physical contact. We then built this RFID trolley with antennas on the side. I download an inventory list from the network to my laptop. Then I push the trolley through the aisles along a prescribed route. Little by little, the machines and devices are automatically identified thanks to the RFID technology. As they are, more and more lines on my spreadsheet turn green. It cuts the time needed for inventory by 97 percent, or 440 man-hours. In the future, we plan to replace the RFID transponders with connected sensors. That would mean we wouldn’t even need to do the walking part. And I could spend more time focusing on my real job. I am a product planner, after all!”

The warehouse talks to the supplier
Attila Szabó, machine accessories and spare parts coordinator in Hatvan, Hungary: “We have about 5,000 machines for the various production and testing processes at our plant, which are very different from one another. Some of them are 15 years old, while others are much newer. That’s why we need lots of different spare parts. So far we’ve equipped the majority of them with RFID transponders. As a result, we need only 12 man-days for inventory – instead of 180. I can focus more on improvement processes now. What’s more, we’ve also partly automated the ordering process thanks to this technology. A part is automatically reordered from the supplier once its quantity dips below a certain level. We used to do that by sending an e-mail, but the process took more than two and a half days. We’ve already implemented this for 14,000 of the 25,000 part types. Soon it will be all of them.”

The right person to call in an emergency
Krisztián Anda, service technician in Hatvan, Hungary: “I just got a text message asking me to come to this production line in circuit board assembly right away. The operator reported a fault using a small, portable computer right at the machine. Our new system automatically notified me immediately. In the past, the operator would have informed his or her supervisor of a problem first, then the supervisor would have called the service technician. That would sometimes take 15 minutes. And I used to get called a lot, even though I’m not an expert for this line. Thanks to the small computers and new software, we’ve cut the reaction time. Now, on average, it’s much less than five minutes – sometimes only about 30 seconds. I can submit the support ticket on site directly into the system. I don’t need paper anymore. Plus, all of us are only called out to look at machines that we’re familiar with, thus enabling fast and effective troubleshooting.”

Learning with shock sensors
Patrick Arnold, skilled production worker in Reutlingen, Germany: “We manufacture the power electronics for electric and hybrid vehicles on this production line. At my station, I tighten a part onto radiators. We used to sometimes put too much force on the tools. That would damage the first few screw threads, which meant that the screw wouldn’t hold properly. It was one of the most common problems here. Now we’ve equipped the Bosch Rexroth nutrunner with a shock sensor that measures the speed at which I put the screw in and gives me feedback. If I’m too fast, the indicator on my monitor goes into the red zone. That’s just to help me keep an eye on things. The figures are also entered directly into our computer system. It additionally stores the torque and rotation angle for each screw so that we can analyze it in greater depth later. It gives you a better feel for what you’re doing and improved quality assurance. I’ve definitely gotten better at my job, and the error rate has gone down.”

Storage in production reduced by nearly one third
Andreas Müller, logistics and RFID expert at Bosch: “At the Homburg plant, we produce injection nozzles for diesel engines. There, RFID radio tags monitor the workpieces’ progress through the factory by identifying the position of transport crates. This enables precise details to be known about the process steps each piece undergoes and when the injectors will be ready. That data, in turn, can be used to determine when the finished product will be packaged, shipped, and installed. Bosch has involved one of its suppliers (Variopack) and one of its customers (Opel) in this process, so that we can all jointly plan and produce better. Using this system, Bosch has been able to boost productivity by 10 percent in logistics alone – and reduce storage in production by nearly one third. To ensure that the systems work to the advantage of all stakeholders, we established a common standard for exchanging data.”

Background: RFID technology
The term RFID (radio frequency identification) refers to technology that can identify objects quickly and without physical contact. RFID tags containing a code can be mounted on transport crates, spare parts, or tools, for example. A scanner uses radio waves to read the code. Depending on the type of RFID technology used, this works over a distance of anywhere from a centimeter to a meter.

The Bosch Group is a leading global supplier of technology and services. According to preliminary figures, its roughly 360,000 associates worldwide (as per April 1, 2015) generated sales of 48.9 billion euros in 2014.* The company’s operations are divided into four business sectors: Mobility Solutions, Industrial Technology, Consumer Goods, and Energy and Building Technology. The Bosch Group comprises Robert Bosch GmbH and its roughly 440 subsidiary and regional companies in some 60 countries. Including its sales and service partners, Bosch is represented in roughly 150 countries. This worldwide development, manufacturing, and sales network is the foundation for further growth. In 2014, Bosch applied for some 4,600 patents worldwide. The Bosch Group’s strategic objective is to create solutions for a connected life. Bosch improves quality of life worldwide with products and services that are innovative and spark enthusiasm. In short, Bosch creates technology that is “Invented for life.”