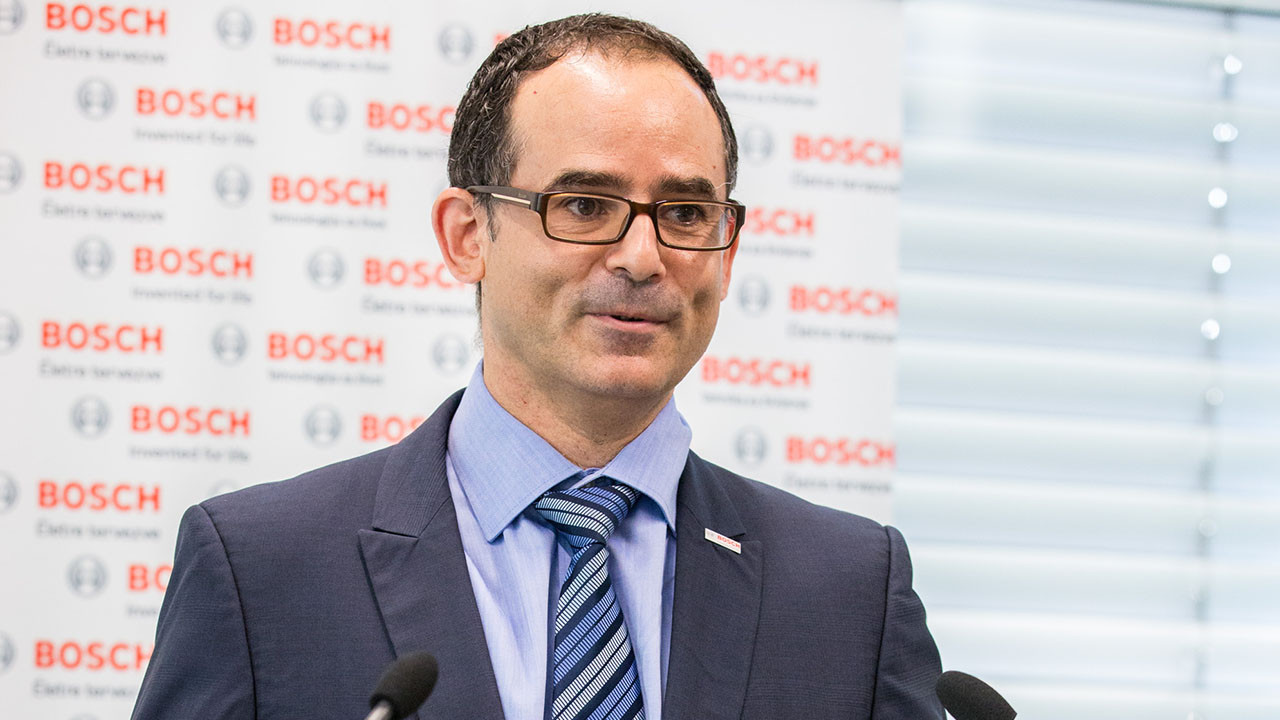 Budapest – Bosch, a leading global supplier of technology and services, achieved double digit sales growth in every area of its Hungarian operations in 2014. Its total net sales including internal deliveries to other Bosch companies increased by 15 per cent to 825 billion forints compared to the previous year. Sales on the Hungarian market increased by 14 per cent to 183 billion forints* in the same period. “2014 was another year of dynamic growth and consolidation for the Bosch Group in Hungary. Our business success clearly shows that our innovation strategy is paying off. We further improved our market position and competitiveness in several areas in 2014,” said Javier González Pareja, representative of the Bosch Group in Hungary at the company’s local annual press conference in Budapest.

Javier González Pareja, representative of the Bosch Group in Hungary

Steady growth with innovative products ”invented for life”
The increasing capacity and stable operations of Bosch’s Hatvan and Miskolc sites as well as its considerable sales development across all business sectors in 2014 underline the company’s steady growth and stable presence in Hungary. Bosch is represented with its four business sectors Mobility Solutions, Industrial Technology, Consumer Goods, and Energy, and Building Technology in the country. “In 2015, we aim for further growth. We expect increased demand for our innovative products ‘invented for life’,” emphasized González.

The latest generation of the world’s best-selling power tool Ixo was developed and is also being produced at Robert Bosch Power Tool Kft in Miskolc. This new version of cordless screwdriver is unique: it makes users’ lives easier by lighting the workspace and providing USB charging. Robert Bosch Energy and Body Systems Kft., also based in Miskolc, added new products to its portfolio including for example the iBooster, an electromechanical booster for automotive braking systems which makes hybrid and electric vehicles even more efficient, while enhancing safety through shorter braking distance or the electronic steering motor PSM2. Additionally, the ebike motor portfolio was extended by the next generation, which at 45 km/h achieves nearly twice as much speed as the previous version. The eBike drives are developed in the Engineering Center Budapest and manufactured in the automotive plant of Miskolc. In Hatvan, Robert Bosch Elektronika Kft. started production of various new product platforms including the latest generations of yaw rate and acceleration sensors, camera system controls and radar systems for higher safety, transmission and motor management controls for better fuel efficiency, as well as new instrumentation cluster systems for more comfort.

Hungary is an important R&D center for Bosch
Hungary is an important part of Bosch’s global R&D network. In 2014, the company spent 24 billion forints on R&D in the country, 26 per cent more than in the previous year. Meanwhile the number of R&D associates in Hungary is approaching the number of 1,500. The Engineering Center Budapest, where more than 1,200 engineers are now at work, develops different kinds of vehicle electronic control systems as well as mechanical components for automotive technology such as safety systems and engine control technology. The center has been continuously expanded since 2005. In August this year, the company will celebrate the opening of the R&D site’s campus. An additional 225 R&D engineers work in Miskolc developing starter motors and alternators for Bosch’s Mobility Solutions sector as well as power tools for its Consumer Goods division.

BSH Kft, the sales center for household appliances in Hungary, is based in Budapest. Robert Bosch Automotive Steering Hungary Kft has two plants in Eger and Maklár which produce steering systems. “Bosch is steadily increasing its strength in Hungary, and continues to plan for the long term. Dynamic growth and maintenance of stability both create jobs and ensure their permanence,” said González. In 2015, the company plans to hire a further 700 university graduates in Hungary.

Continuous expansion of training portfolio
Besides research and development, the Bosch Group places great importance on ongoing support for the training of skilled workers and engineers in Hungary. The new training center at the site of the automotive electronics plant in Hatvan, which was opened in April 2015, is the outcome of a 170 million forint investment. It will take in 56 students each year and make the plant a focal point of automotive electronics training.
Bosch has been providing dual training in Hatvan at secondary level for 15 years. From 2015, the company will also offer higher dual education at the Hatvan plant. Students of mechanical engineering from Szent István University in Gödöllő and logistics management students from Budapest Business School will be studying in this program from September 2015.

Under the lead of Bosch’s automotive plant in Miskolc, a program for high-level training in lean management was started there in September 2014 as part of a collaboration with the University of Miskolc and the Lean Enterprise Institute in Hungary. The program, which ends with a master degree in lean-management, provides students with thorough knowledge and applicable practical skills. This ensures that new graduates have theoretical as well as practical competence when they start working at the company. “The primary aim of this program is to enhance engineering education in order to find highly qualified applicants,” said González at the annual press conference.

Top awards for successful brands
The Minister of the National Economy awarded the Miskolc automotive parts plant the title “Investor of the Month” at the beginning of this year. The power tools plant in Miskolc has also recently received three top-level industry awards: the Shiba Award, which honours companies which excel in introducing total quality management systems, the Logistics Excellence Award from the board of the Hungarian Association of Logistics, Purchasing and Inventory Management, and the second place at the award ceremony of European Logistics Association this April. In 2014, Javier González Pareja received the Foreign CEO of the Year Award, which was launched just last year by the Budapest Business Journal and the National Investment Agency.

Bosch Group business outlook for 2015
The Bosch Group expects global sales to grow within an exchange rate-adjusted range of 3 to 5 percent in 2015. Speaking at the company’s recent annual press conference in Germany, the Bosch CEO Volkmar Denner said: “Our economic and technological strength in established business fields is enabling us to tap into new market segments.” Web-enabled products and internet-based services are one of the focal points of the company’s future business. “We are driving connectivity forward in all our business sectors and playing an active role in shaping it,” Denner added. In 2014, Bosch launched many new products and connected solutions, including software solutions for smart heating systems and buildings as well as for connected industry and connected mobility. With the complete acquisitions of BSH Hausgeräte GmbH and Robert Bosch Au­tomotive Steering GmbH, Bosch has strengthened its position in the fields of smart homes and automated driving.